Connecting to the land - part 1

A Toronto journalist asked me yesterday to say something about the importance of sharing Toronto's history: how does knowing the history change the present and the future? Interesting questions, and they made me clarify some of the ideas I've been considering over the last few years. Here's what I said:

When First Nations people speak of connecting to the land, they are talking not only of some personal, spiritual bond that is inaccessible to anyone else. Connecting to the land also means knowing the history of a place; hearing and telling its stories; and respecting the events and the people that have marked its landscapes.

In this sense, learning about the history of our community is a way in which we can all connect to the land. Local history allows us to understand why things are the way they are, and, at its best, it can guide our decisions for the future.

In the case of Toronto, for example, a growing public awareness of the ancient history, millenia-old function and continuing importance of the Oak Ridges Moraine led directly to legislation early this century to protect the Moraine. In a similar way, the flood of recent books and events relating to Toronto's early history may well change how we see the city and its place in Canada. Toronto's origins are Aboriginal and French rather than English. The city is a part of all of those worlds (and many more, of course). I believe that public attitudes and policy in Toronto will evolve as we learn more and more about its Aboriginal and French-Canadian heritage.

Posted by Unknown at 7:11 AM No comments:

Micheline Marchand and her husband Daniel Marchildon are having a pretty good summer. 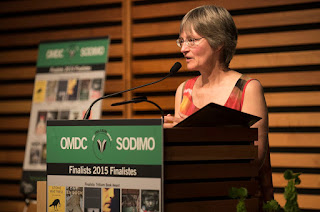 On June 17, Micheline won the 2015 Trillium Book Award for Children's Literature for her French-language novel Mauvaise Mine. Micheline's book explores the dilemmas facing a Northern Ontario community devastated by the closing of the local mine. The Trillium is Ontario's most prestigious -- and best paying! -- literary award. To give you some idea, among the English-language nominees were Margaret Atwood and Thomas King... The Trillium is a big deal. Congratulations, Micheline!

Funnily enough, Daniel won exactly the same award in 2011, making him and Micheline the first husband and wife combination to take the top prize in the history of the Trillium. There must be something very literary in the water at Lafontaine, where they live... 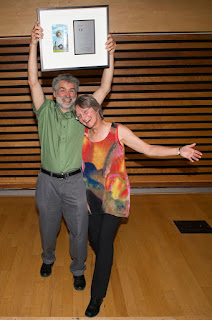 Daniel's novel The Water of Life (uisge beatha) will be published in English this month. (Don't mention it to Daniel, but I'm going to try and talk him into having a party.) The French-language original L'eau de vie (uisge beatha) won the 2009 Émile-Ollivier literary prize and got lots of good reviews.

As I write this, I believe that Micheline and Daniel are both busy with the Festival du Loup in Lafontaine; and then Daniel is off to Penetanguishene, where he will be playing the part of Samuel de Champlain in the three-day Rendez-vous Champlain (July 31 - August 2).

Yes, a pretty good summer so far. And we're still only half-way through...

The people who keep telling me that books are dead and that no-one reads anymore should have been at the Salon du livre de l'Outaouais at the end of February.

I could have used their help.

A couple of tough guys would have come in handy as I fought my way through hundreds of bibliophiliac kids and adults at the Palais des congrès in Gatineau.

There were dozens of French-language publishers, thousands of books on display, and many, many writers, among them my friend Daniel Marchildon.

Daniel and I met in Stanton Residence at the University of Ottawa in 1977. We were both in Lettres Françaises, though I don't believe we ever had any classes in common. Daniel was part of the Franco-Ontarian gang of friends that I clung to and tried to emulate. He was there for my first few steps in Real French: ex. "Hé, watch-toé là!" as someone was about to be run down on Laurier Avenue.

Daniel told everyone who would listen in 1977 that he was going to be a writer. He has been a role model for me (and probably many others) over the years because he never faltered in that determination. Almost 40 years later, he is the author of several novels, screenplays, books for children and young adults, and non-fiction. He has made a career of literature, and while the pay may not be great, he is now a prominent figure in Franco-Ontarian letters.

Daniel's latest book is Zazette, la chatte des Ouendats, the story of the first cat to be introduced to the Wendat First Nation (who had previously known only dogs) by the French. 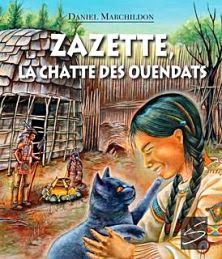 I had the pleasure of spending some time with Daniel and his wife Micheline -- also a writer -- after the Salon du livre. We talked a little about the book business and about the Brûlé-Wendat Expedition. A veteran of numerous historical re-enactments, Daniel is already booked to appear as Champlain twice this summer. He may also take part in the canoe segment of the Brûlé-Wendat event in September.

Daniel is the subject of a recent Carte de visite documentary on TFO  -- 26 minutes and 49 seconds of Daniel on literature and history! It's great to see Daniel getting more and more attention, and I wish him and Micheline all the best.

Right now I am making last-minute changes to my manuscript before the editorial staff at Dundurn takes a knife to it. The experience reminds me of how peculiar it is to be on this side of the writing and editorial process. 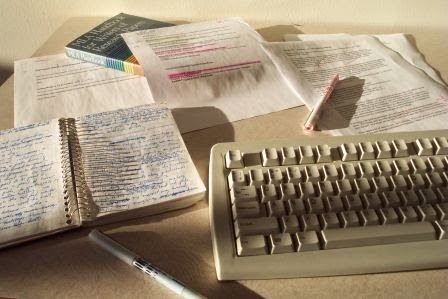 As a high school teacher-librarian, I'm used to advising students on research skills, documentation, avoiding plagiarism, formatting, grammar & syntax... And though it all seems so obvious in my day job, I'm finding it a lot trickier when it comes to my own stuff. For instance:

A renaissance of interest

At the end of October, I had the pleasure of speaking briefly to the Société d’Histoire de Toronto. The SHT is a petite, dynamic community organization that punches well above its weight. Over the last few years, it has realized the Sentier Partagé/Shared Pathway project along the lower reaches of the Humber; organized a regular series of talks on various historical topics; and conducted scores of guided tours of sites in and around Toronto. Next year, as part of the celebration of 400 years of francophone presence in Ontario, the SHT is re-enacting Étienne Brûlé’s 1615 trip down the Toronto Carrying Place (an expedition which the Société has kindly invited me to join). Ils sont débrouillards, ces amateurs d’histoire! They know how to get things done!

The SHT is just one of the players behind the growing fascination with Ontario’s early history. The Mississaugas of the New Credit are the host aboriginal nation of the 2015 Pan-Am Games, and plan to highlight Toronto’s Native heritage next summer. The Town of Penetanguishene is restaging Samuel de Champlain’s 1615 visit to Huronia, and the Ontario400 project (run by the provincial government and several other organizations) is happily encouraging and promoting events to commemorate Ontario’s 400 French years...

Then there are the books. Just to mention a few of the most recent and readable:

I am delighted to find my own book in such distinguished company and to play a small part in this renaissance of interest in the history of Southern Ontario.
Posted by Unknown at 7:02 AM No comments:

Welcome to the Toronto Carrying Place!

Thank you for joining me today on the trail.

One of my deepest interests -- and a prime reason for me writing a book -- is exploring how the past seeps into the present. The Carrying Place never had an imposing physical presence. It was, after all, a simple footpath through the woods; easily overgrown by bush or erased by anyone clearing forest. But it was an important part of life for people in Ontario for thousands of years, and it created ripples in Ontario's history that we can still see today. In this blog I hope to discuss some of those consequences and look at how the Carrying Place still flashes into our awareness from time to time.

Other issues that may well come up:

And I'm hoping that readers will be able to help clear up some of the stickier technical details that stumped me during my trip and during the writing of the book. Was Emery Creek really "Drunken Creek"? How many horses did Lt-Gov Simcoe take with him up the Carrying Place in 1793? I'm sure that we'll be able to figure it out together.

Let me know about your interest in the Toronto Carrying Place. I'm looking forward to talking with you over the next few months.

With best regards,
Glenn
Posted by Unknown at 10:39 PM No comments: